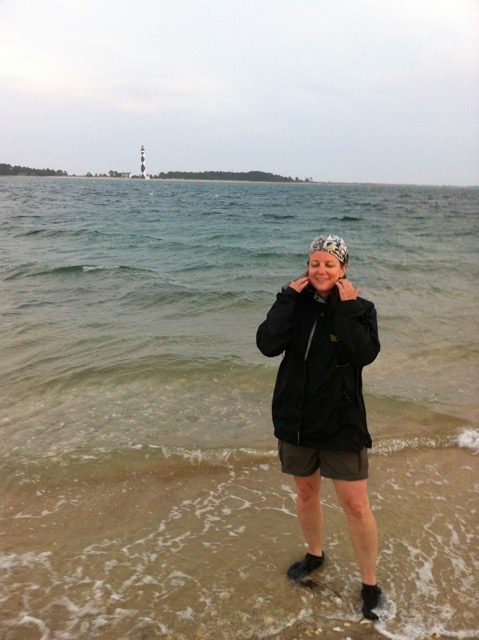 Where are you from?  Your profession?

I am a native North Carolinian relocating to Charleston, South Carolina. My background for 20+ years was in Information Technology, of which I spent 14 years as a software support engineer with a large software firm. Since 2013, I’ve been self-employed as a licensed massage therapist and will soon be adding yoga teaching to my service offerings.

When and how did you become interested in paddling?

My first kayaking experience was in 2000 in the Outer Banks of NC.  After that experience, I bought a kayak kit and built my own wooden kayak but never used it! At the time, I didn’t know how to find community and I didn’t want to paddle by myself. It wasn’t until 2009 that I tried kayaking again after being inspired by kayakers paddling among the spider lilies on the Catawba River as I watched in envy from the bank.

A week later, I bought a kayak and have been paddling ever since. In 2009, I found community when I started kayaking. I found a community of friends and a community with Nature. It helped transform me. I didn’t become a saint by any means, but I found a sense of belonging for the first time. Kayaking and the sea are an essential part of my soul.

The Peace of Wild Things

When despair for the world grows in me
and I wake in the night at the least sound
in fear of what my life and my children’s lives may be,
I go and lie down where the wood drake
rests in his beauty on the water, and the great heron feeds.
I come into the peace of wild things
who do not tax their lives with forethought
of grief. I come into the presence of still water.
And I feel above me the day-blind stars
waiting with their light. For a time
I rest in the grace of the world, and am free.

Where is your favorite place to paddle?

My love is coastal paddling, whether it be through marshes or open water. The Charleston, SC area has many wonderful places to paddle and a strong sea kayaking community. That’s probably my overall favorite area but there are many others, too.  Lake Jocassee, which straddles North Carolina and South Carolina, is a beautiful inland lake surrounded by picturesque mountains, with some awesome waterfalls, unexpectedly great hidden beaches and cool, clean, clear, soft water.  The Outer Banks of NC has some very cool kayaking routes out to islands, such as Shackleford Banks, where wild horses roam and the Cape Lookout lighthouse can be toured.

The Florida Keys are amazing! I had my first trip there this year and hope to make it a regular destination.

What’s the most interesting thing that ever happened to you on a paddling trip?

In 2011, I did a 60-mile solo paddle from New Bern, NC to Harkers Island, NC via the Neuse River, Newport Sound, and the Intracoastal Waterway. The overall trip was a bit spiritual to me as I faced some challenging paddling conditions (in which I wondered why the heck I was out there by myself), as well as no showering, for four days. Although, there were many highlights of that trip, I’ll share one that is not really about the paddling.

The last day of the trip, after having gotten stuck in plough mud in a marsh during low tide, I arrived well past my expected return time at the Harker’s Island Visitor Center where my car was parked.  After landing at the dock, I gathered a few bags from the day hatch and headed towards my car.  Opening the dry box in which I kept the car key, my heart skipped a beat when there was no key there.  At the beginning of the paddle, I made a conscious decision to keep the car key in the dry box along with the flare gun. Now, I worried the key had fallen out of the dry box during one of the stops to change the GPS batteries.

By this time, the iPhone battery was dead so I had no way of calling anyone and there were no rangers at the closed visitor center.  Suppressing panic, I scanned the horizon and spotted a woman near the beach.  Generally, I am hesitant to ask anyone for assistance (although I’m always hoping someone will offer it, lol), especially not strangers.  However, in this situation, there was no choice but to be humble and reach out.

As I approached the woman, I introduced myself and explained the situation.  The woman, named Kathy, graciously agreed to drive me to the area where a dock I had stopped at earlier might be located. Finding the dock from the street was not as simple as it sounded and we ended up engaging a couple of other people to help.  After finally identifying the correct dock, I had to ask another resident, Matt, to give me a ride in his boat to it because, strangely, it was not accessible from the bank at high tide.  After getting to the dock, the key was not there.

When I walked back into Matt’s front yard, Kathy was still there but now there were also four other people whom I had never met.  One called out to me, “Hey Gigi! Did you find your key?”   In this escapade, I was meeting half of Harkers Island and the other half was getting to know me by reputation, it seemed. By now, Kathy had to leave so a gentleman named Chad agreed to drive me back to the visitor center. Chad, with an open beer in one hand, headed to the fridge in his garage and grabbed another beer for the ride, which was about two miles – roundtrip – for him. Ya gotta have sustenance, I guess.

Eventually, I found my key after unloading all my gear from the kayak and going through all the dry bags. It turned out to be in the toiletry bag….yes, there’s no logic in that and I have no idea how it got there. :) But, getting to spend that unexpected time with the residents of Harkers Island was definitely a highlight.  Later on, I wrote a blog about the experience and summarized it like this:

The serenity of the solitude, the awesome power of the wind and water, the kindness and generosity of the wonderful Harkers Island and New Bern residents, made this a special, memorable experience.  I would do it, again.  A part of me says I wouldn’t do it solo, again.  But, on another level, I know there is something to be gained from this experience other than an increased confidence about paddling in rough water conditions. What that may be is still unfolding.

An hour or so after writing the previous paragraph, in a sublime, serendipitous unveiling of an answer, I came across this quote from author Paul Theroux:

It’s only when you’re alone that you realize where you are. You have nothing to fall back on except your own resources. You need to find your way…You need to be on your own so that you can meet people as you are, and as they are.

Describe the ACA certification(s) you’re working on and why.

A couple of years ago, I received ACA certification as a Coastal Kayak Tour Guide. During that training as well as on many of the Charleston area paddles, I’ve been inspired by the expertise and skills of the instructors as they help other paddlers. My next training is ACA Level 3 Coastal Kayak Instructor scheduled later this year. It is a personal challenge to improve as a paddler myself with another goal of being able to work with other paddlers to help them improve their skill sets and to gain confidence. It’s a way to share this sport which has given so much to me.

How many Paddle Florida trips have you gone on and to where?

So far, I’ve taken two trips with Paddle Florida, the 2010 Suwannee River trip and the 2015 Florida Keys Challenge. I look forward to repeating the Keys paddle as well as joining other Paddle Florida destinations as time and budget allow.

What keeps you coming back?

I’ve met some really wonderful people on the trips I’ve taken.  Bill and Jan are both awesome and make the trips a lot of fun. There are a number of “regulars” such as Paul, Scott, and Mim, who made me feel like a part of a tribe on both the 2010 and 2015 trips so the opportunity for community and the camaraderie is appealing.

Florida’s natural beauty, fellow paddlers, the food, and the music all converge to create a soul satisfying experience.

Can you describe a Paddle Florida trip highlight?

At one of the beach lunch stops, buying a fresh coconut from Tony the coconut man and getting three sips of coconut water for $3. Luckily, back at camp, my friend Scott took up the challenge to crack it open so we could snack on the delicious coconut meat. It was like being on Survivor except having access to a catered dinner and entertainment by Bing Futch afterwards!

The sheer beauty of the open water in the Keys and the stunning sunsets were also a highlight, as was getting tricked by a friend into taking a swig of Fireball whiskey in a taxi in Key West. The gamut of experiences and highlights can be very broad on a Paddle Florida trip.

What advice do you have for folks considering a Paddle Florida trip?

Pack lightly. Wear your skirt on open water paddles such as the Keys. Know that you have the freedom to make the trip your own, but you also have the opportunity to be an important spoke in a communal wheel. Don't overestimate your skills, but also don't be afraid to try new things and push your limits. Empty your cup so it can be filled with the beauty of Florida's landscape, waterscape and wildlife, with the knowledge of local history shared by local guides and experts, and with the many layers of perspectives offered by fellow paddlers.